You’ll need to head over to The Athletic to see the full results of their extensive fan poll ($), but I wanted to highlight a few trends that might be of particular interest to CI readers. To clarify, I’ve picked out a few different items that follow some of the stories we’ve discussed here with relatively high frequency, either as posts or in comment conversations.

That means I won’t be sharing how fans feel about the Ricketts family as owners or whether they believe the ownership panel should be brought back to Cubs Convention after a two-year absence. Huh, it’s almost like the explanation that fans didn’t like or want that panel doesn’t hold water. I’m choosing not to divulge fans’ thoughts on returning to Wrigley post-COVID or how they feel about a Sammy Sosa reunion, though we have actually covered all of those topics here before.

Rather, I’d like focus more on how fans feel about the state of the team over the next five years or so. It’s easy given all the general negativity, not to mention the lack of sunshine across the Midwest, to feel the Cubs have failed to adequately set themselves up for the future. But do fans really feel that way?

First up is the change at manager, which roughly three-quarters of the poll’s 2,500-plus respondents believed would have a positive impact. I’m among that group for what it’s worth and I believe I answered in the 1-3 range. Lest you believe I’m invested in some sort of hokum, I really do think changing things up and dialing back in on some of the little fundamental aspects of the game that seemed to have been afterthoughts in recent seasons will help. 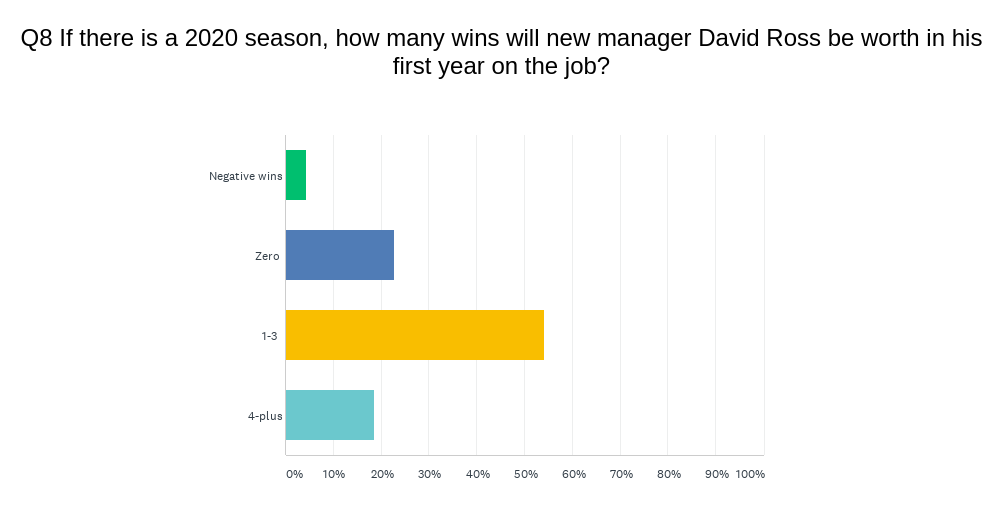 That same optimism is reflected in the answers to when the Cubs will win their next World Series, something 53% of fans believe will happen within the next five years. Another 18% or so believe the Cubs will at least win again before the White Sox, while 29% went more flippant by voting “Sometime in the next century.”

If the Cubs are to win again in that earlier timeframe, fans believe Javy Báez will be leading the charge. He was voted as “most productive Cub over the next decade” in a landslide and also outpaced the field in terms of which player should be prioritized for an extension. What’s more, Javy got the most responses to the question of whose departure would hurt the organization the most. 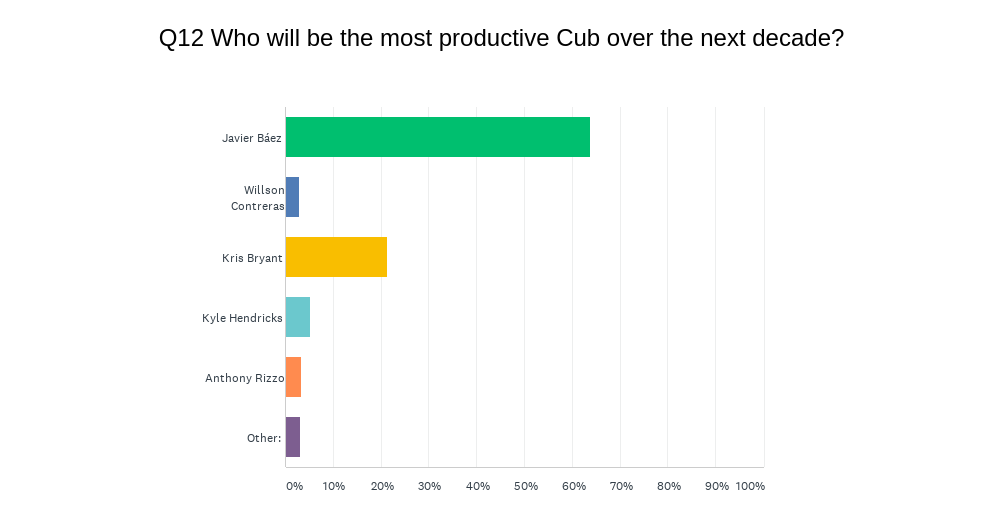 Interestingly enough, however, Javy came in third on the question of which current Cubs players are future Hall of Famers. You’ll need to check out the full poll to see how those results shook out and to read Sahadev Sharma’s pragmatic views on the topic. As for the next Hall of Famer with Cubs ties, well, that one is both simple and overdue. Pat Hughes should have won the Ford C. Frick Award already and is a shoo-in to win it this year.

Marquee Sports Network didn’t come out looking great, largely due to the dormant Comcast/Xfinity deal that the Cubs say should be finalized before the 2020 season begins. I’ve got a feeling that a lot of the initial acrimony will fade quickly if and when we get live baseball this summer and if the carriage deals are buttoned up. If the Xfinity deal is still on hold, though, Tom Ricketts is going to have an even more difficult time with the boos at CubsCon.

The final section of the poll dealt with favorites — Wrigleyville bar, ballpark food, etc — and I was pretty surprised by the runaway for all-time player. There are some demographic factors at play and my choice was the winner, I just didn’t expect the margin to be as wide. There are 25 questions in all, so go check out the answers to the rest of them and stick around all the way through for some of the comments at the end.