Heading into the spring, I thought catcher might be the most dominant position the Cubs had in their minor league system. When it comes time to reassess the system this fall, I might be persuaded to change my mind based on the work of this year’s relief corps, three of whom could find their way to Chicago this year.

1. Dillon Maples might be the most well-known reliever in the system. He got off to a bit of a rough start this year at AAA Iowa but has been pitching well since the second week of the season. He boasts a 17.5 K/9 rate and still needs to cut down on the walks (seven in last 4.1 IP, 10 in 10.1 IP). Maples has been bypassed five times this season when it comes to promotions, though that’s as much about the Cubs’ needs as it is his own. At some point this year, he’s going to get another crack at the majors.

2. Randy Rosario was signed by the Cubs this winter. What I liked about the move at the time was that he was young (23), had some MLB experience, and was a left-hander. The Cubs have kept him down at AAA Iowa, where he has allowed a single earned run in 15 innings. He is also missing some bats as he’s struck out 10 and has posted a minuscule .173 batting average against.

3. Dakota Mekkes is one prospect who could skip AAA and go to the majors from, although I doubt that happens. However, he has just been dominating AA just like he did at Myrtle Beach last year and has not allowed a run in his 13.1 innings over 10 games. That include Includes Tuesday night’s extra-innings save in which he began the inning with a man on second base. His walk rate is a little better this year, but, like Maples, Mekkes still has room to improve. To be frank, I don’t think there’s much left for him to do at AA and he should be in Des Moines soon.

4. Jhon Romero‘s two-pitch mix, a 93-95 mph fastball and a sharp breaking curve, seems to be improving in Myrtle Beach. When I first saw him at South Bend last year, I wondered what he was doing there as he baffled Midwest League hitters. What I like about Romero is that he gets some ugly swings because batters just can’t time him up, especially on the curveball. I don’t think he’s long for Myrtle Beach either. 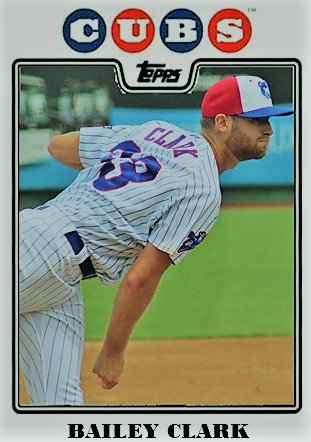 5. Bailey Clark has already been promoted once and at the rate he’s going in Myrtle Beach, he’s not gonna be there long either. Last year, Maples went from Myrtle Beach to the majors and I think Clark could come close to moving three levels this year. But first, he’s got to continue what he’s doing well, using a mid to upper 90’s fastball in combination with a hard biting slider that he’s able to command. Between the two levels this year, he has a 1.17 ERA with 28 K’s in 23 IP. The big stat no one is talking about is he is averaging almost five groundouts for every fly ball/pop-up – an astonishing rate. If he can continue to do that, he should be in Tennessee by mid-June. The key is to take it one level at a time.

6. Tyler Peyton showed great progress last summer in a relief role in South Bend and was one of the best relievers in the system in August with a 1.29 ERA. He’s doing pretty much the same thing this year at Myrtle Beach and he’s even moved into the closer role a few times. I don’t know if he’s going to move up this year, but I like what I’m seeing as he continues to flash a 93-95 mph fastball with a nice curve and change.

I’m not really surprised these guys above are doing well, but I am surprised that they are so dominant to begin the season. Things could change a little bit as it warms up over the next 4-6 weeks, but the ability to throw strikes is paramount to their success.

I almost included Rollie Lacy of South Bend on this list. However, he now has a rotation spot in South Bend replacing Jose Albertos.

Brendan King has only just begun to pitch at South Bend. The 2017 draft pick out of Holy Cross pitched well as a starter last year for Mesa and has done very well in relief at the next level. I don’t know if he’s going to get a chance to start, but I would be interested to see how he would do in that role, too. He usually is the upper 80’s with his fastball to go along with a curve that he control and throw at will. With his command and a plus curve, he should do well at this level and high-A.

There could be other relievers who will pop in the next month, so keep your eyes open. One never knows who is coming and when