If you were told the Cubs signed a pitcher with one of the best strikeout rates in baseball, you probably wouldn’t expect him to throw slower than 95% of the league. Or to be nearly the same age as Theo Epstein and Jed Hoyer. Yet Koji Uehara, who averaged 86.7 MPH in 2016, has a better strikeout rate than all but 10 relievers over the past four seasons. And that is why the Cubs chose to offer a one-year pact worth $6 million to a man entering his age-42 season.

I like pitchers who strike out lots of batters and walk essentially no one. You probably do as well. That is why I was giddy when the Cubs announced the Uehara deal for almost the same dollar amount as last year’s flub, Rex Brothers. Whereas Brothers used to be successful because of a high-velocity fastball, Uehara has made a career out of throwing 88 mph four-seamers and a flurry of splitters (+40%), both — and I highlight that as a point of emphasis — of which have led to a K/9 of nearly 12 since 2013.

The harder pitchers throw, the more whiffs, or so we are told. Yes, pitchers who throw faster tend to scare batters into swinging and missing, but the relationship between velocity and whiffs is not as dramatic as we may have been led to believe. Surprisingly, the pitchers who throw extremely slow might have an advantage.

I charted four-seam velocity and whiff rate — only 2016 data from PITCHf/x was used here — in order to visualize the relationship between the two. The first chart shows that velocity explains 9% of a whiff’s variance, with the other 91% being attributed to other factors. This made sense to me, but do you see the data points on the far right of the chart that are below the dotted line? There are several of these dots, which nudged me examine the relationship between velocity and whiffs for four-seams below 89 mph. 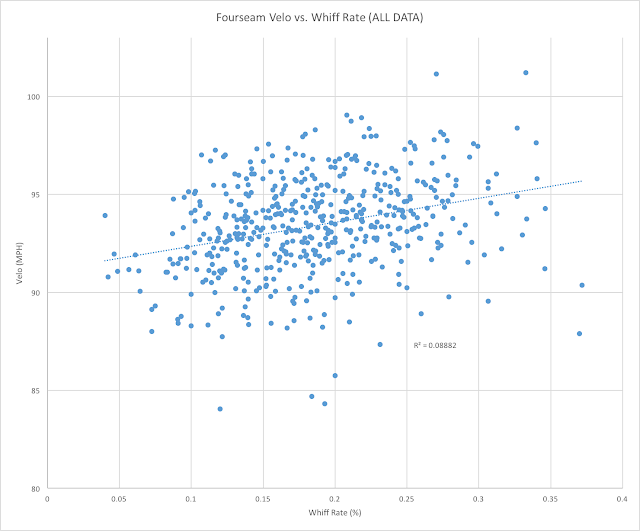 And here’s where we get to the juicy part of the post. In the second chart, we see that pitchers who threw slower didn’t generate fewer whiffs. On the contrary, they actually generated slightly more (caution: small sample size). In fact, all but one reliever who threw less than 87.5 mph had an above-average (> 18.5%) four-seam whiff rate. 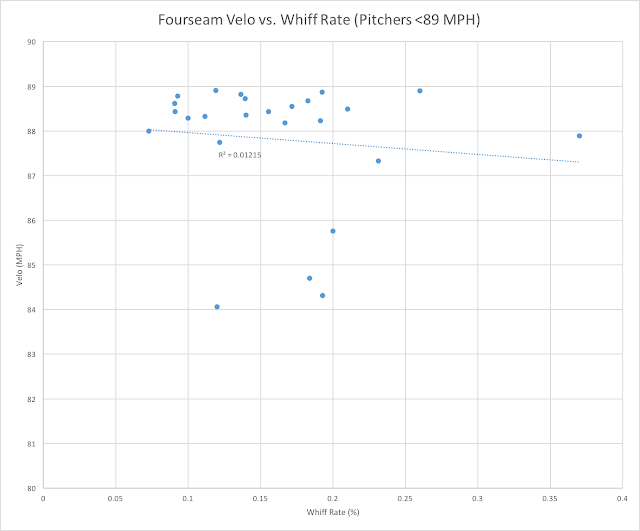 There are going to be people who argue that Uehara’s velocity is reason for concern. Don’t listen to them. The difference between 89 and 86 mph fastballs is negligible to say the least. Perhaps surprisingly, slower fastballs might actually contribute to more swings and misses. As long as Uehara is healthy and continues to spin splitters, he’s going to outproduce his $6M contract with ease.